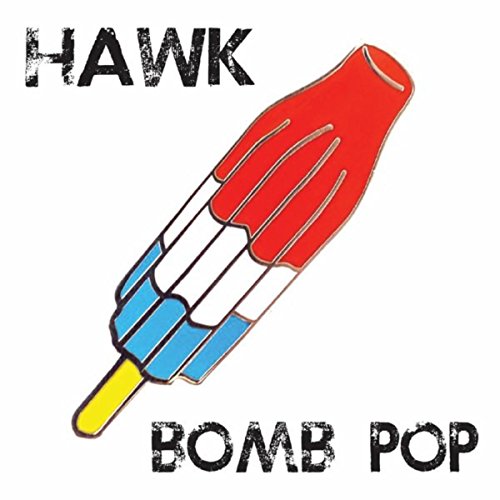 Hawk may have started out as a David Hawkins project, but it quickly evolved into a supergroup of Alt Rock veterans.  In addition to Hawkins, the band includes Gary Louris (Jayhawks), Ken Stringfellow (The Posies, REM, Big Star) and Pete Thomas (Elvis Costello & the Attractions).  And Bomb Pop offers exactly what you hope it does, a great, off-kilter Rock and Roll record with a tinge of Alt Rock jangle, a smidgen of Midwest Country, and a dash of psychedelia here and there to round it all out.

The band kicks it off right with “Allison’s Gone,” reminding me a great deal of The Lemonhead’s best moments. It’s catchy and quirky and melodic and make’s you feel good, despite it’s dark subject matter. “I Lied” is another of Bomb Pop’s best moments, with a Pop hook that is drenched in psychedelia. The horn work and layered vocals and general weirdness of it all is brilliant and catchy and strange all at once. “Take My Time” and “Mrs. Anderson” are also prime examples of the jangly Pop feel that lies close to the surface here. Both songs are infectious, and, by the first chorus, you can’t help but try and sing along. They just feel like summer, dammit.  The Country-laden “Dry Your Eyes” sticks out like a sore thumb with its steel guitar and sad rhythms, but it’s unbelievably good. It’s an interesting way to end an album of Alt Rock songs, but hey, that’s part of makes it an alternative to the mainstream right?

Bomb Pop is a fun album that is perfect for a sunshiny drive with the top down. If you like any of the members other bands as well as artists like Lucero’s more up-tempo material, Bart Davenport, early Beck, The Replacements, and The Lemonheads then you’ll love Hawk’s Bomb Pop.