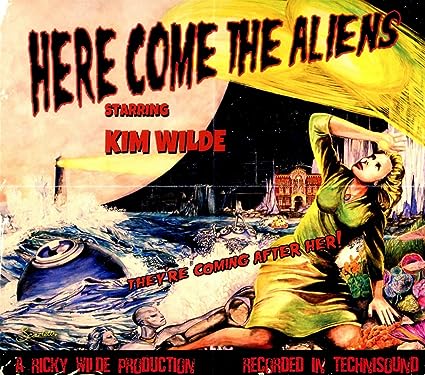 Having sold over 30 million albums, Kim Wilde is a household name in much of the world, but is best known here in the United States for her iconic hit “Kids In America” from the very early 1980’s. For me, it is her fourth album, Teases & Dares, that made a younger version of me into a lifelong fan. I still love the futuristic look and feel of that album, and Here Come the Aliens has the same kind of vibe, albeit more contemporary. It mixes big Pop gems, thoughtful ballads, and tongue-in-cheek Pop rockers that remind me of how good this genre can be when people live a little.

I absolutely dig the duo of songs that kick the album off. “1969” blends from the sounds of the radio dial switching to an electro-laden Pop gem that mixes big fun with some serious groove. Wilde sounds fantastic and the big, sing along vibe goes playfully well with the “Here come the aliens” tag line. “Pop Don’t Stop” is another fun, upbeat number that looks back to better days. The duet style vocal (with her brother) is fantastic and gives it a big radio feel that you simply can’t deny. It’s as infectious as they come and lyrically, it’s anthemic and thoughtful in much the same way as Bryan Adam’s “Summer of ‘69” or Alien Ant Farm’s “Homage,” stressing the importance of music in our lives.

“Solstice” is a quieter moment that stands out as well, opening with Wilde’s still shining voice, nearly naked. As the piano begins to lead the song along, it starts to take the shape of a radio ballad without losing it’s intimacy. The album’s final moment, “Rosetta,” has a similar feel, proving that Wilde is just as much a balladeer as she is a Pop star. “Cyber Nation War” is an odd section of the album, but as an old Teases & Dares fan, this is exactly what I had been hoping to hear. It’s like a Pop version of Mad Max complete with a weird background choir and lots of synthesizers! Heaven.

Kim Wilde and her crew really nail it on Here Come the Aliens. This is one of those late career moments of brilliance that happen from time to time. I enjoy most of her albums, but this is arguably her best. It may even be arguable that that is arguable. If you enjoy Pop music that embraces the fun just as much as the beauty, then this album is for you. If you have ever been a Kim Wilde fan and fallen off, then it’s time to jump back on immediately. Everything you love about her is summed up on this album.